Bryan Choong[1] is a trained counsellor and the first Centre Manager and subsequent Executive Director of Oogachaga, a personal development agency that has provided LGBT-affirmative counselling and support for the community since its formation in 1999. He was one of the recipients of the inaugural Asia Pink Awards, held in Singapore on 16 March 2014. 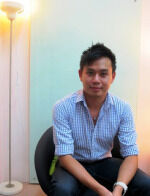 Choong and Leow first met as volunteers in another organisation, and at some point, they both heard about Oogachaga. Since 2004, Choong had been involved in every aspect of Oogachaga’s work: as support group member, facilitator, trainer, volunteer, then as Oogachaga’s first full-time Centre Manager, then Executive Director, and after handing over that role to Leow, continued to serve as a volunteer board member, counsellor, trainer, fundraiser and in-house graphic designer. Choong designed Oogachaga's Cirque du so Glam gala fundraiser programme booklet, raffle tickets and slides, apparently fiting all that into a 24-hours day. During the event held on 25 August 2017, Choong was given a special award for extraordinary service.

Those who know Choong will definitely recognise in him a slow-burning fire, a strong sense of social justice, a dogged desire to just get on with doing things, and a very low tolerance for bullshit and inaction. In his words: “dun waste time lah!”

In early 2016, Choong became a Program Associate at B-Change Foundation.

In 2017, he studied at the University of Edinburgh on a one-year programme leading to a Master of Public Health (MPH) degree with the support of the prestigious Chevening Scholarship offered by the UK Foreign and Commonwealth Office.

In November 2018, Choong, then 41 years of age, filed a case in the Supreme Court against the Attorney-General, stating that Section 377A of the Penal Code, which criminalises sex between men, was "inconsistent" with portions of the Constitution, and "is therefore void"[2]. According to court documents, Choong stated that Section 377A was inconsistent with Article 9 of the Constitution, which states: "No person shall be deprived of his life or personal liberty save in accordance with law." The two other portions deemed "inconsistent" were: Article 12, which states that all persons are equal before the law and entitled to its equal protection; and Article 14, which states that every citizen of Singapore has the right to freedom of speech and expression. Article 14 also states that all citizens of Singapore "have the right to assemble peaceably and without arms" and have the "right to form associations". Choong, who declined to be interviewed, was represented by Senior Counsel Harpreet Singh Nehal from Cavenagh Law, as well as a team from Peter Low and Choo law firm comprising lawyers Remy Choo Zheng Xi, Priscilla Chia Wen Qi and Wong Thai Yong. Responding to queries from The Straits Times, the Attorney-General’s Chambers (AGC) said it had received the papers and was studying them. The AGC spokesman added: "We are unable to comment further as the matter is now before the courts."