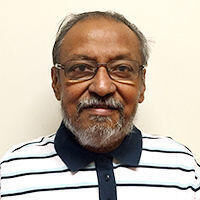 Professor Chinnaiya Anandakumar is currently the chairman of SSR International Foundation Antenatal Diagnostic Centre and Well Women Clinic in Camden Medical Centre, Singapore. He has over 35 years of experience and is the winner of the Singapore National Technology Award (1988). He previously served Asia Oceania Federation of Obstetrics and Gynaecology (AOFOG) where he held the following positions: chairman of the ultrasound subcommittee (1997 to 2008), deputy secretary general (1998 to 2007), vice president (2007-2009), president-elect (2009-2011), and president (2011-2012).

He currently practises at:

He also served at the National University Hospital. He ran the hospital’s antenatal diagnostic centre from 1985 to 1998 and was in charge of its ultrasound learning course for the Royal College of Obstetricians and Gynaecologists until 2001.

He graduated from the National University of Singapore where he obtained his MBBS degree in 1976 and his MMed in Obstetrics and Gynaecology in 1982, the same year he became a member of the Royal College of Obstetricians and Gynaecologists (London). He was trained by his uncle, Professor Sittampalam Shanmugaratnam, who is known in the field of medicine as Prof. Shan S Ratnam. After undergoing Prof. Ratnam's tutelage, he went on to perform many sex reassignment operations for transgender patients. He is the former head of the obstetrics and gynaecology department of Singapore’s National University Hospital and is recognised in the country as an expert in human reproduction and in vitro fertilisation (IVF).

Dr. Anandakumar is committed to the advancement of foetal medicine and imaging care particularly in developing nations in the Pacific. He established ultrasound training centres in India, Sri Lanka, Bangladesh, Malaysia, and the Philippines where his clinic is involved in conducting regular workshops for obstetricians and gynaecologists.

Dr. Anandakumar is a highly experienced, award-winning obstetrician and gynaecologist with subspecialty training in feto-maternal medicine. He has been practising for the past 35 years and introduced several groundbreaking antenatal diagnostic tests in Singapore including foetal echocardiography, chorionic villus sampling, and ultrasound-guided amniocentesis and foetal blood sampling, among others. Deeply committed to the safety and well-being of pregnant women and their unborn children, he strives to deliver the highest standards of care using only advanced technologies and proven safe and effective methods.