The Censorship Review Committee (CRC) is a government-appointed committee that reviews and makes recommendations regarding Singapore's censorship policies. Its mandate is to update censorship objectives and principles as society evolves while preserving Singapore's broader interests - national security, social cohesion, and community and family values. First convened in 1992, the committee was to be formed once every decade. However, the government decided to form a mid-term CRC in 2009 in view of the rapid changes in Singapore's media and social landscape.

The seven-member committee that produced the Jayakumar Report of 1981 may be thought of as a predecessor of the CRC, considering that it enunciated Singapore's censorship objectives and principles. Appointed by the government and headed by S Jayakumar, who was then the Minister of State for Law and Home Affairs, the committee had the task of reviewing the censorship of films and publications.

The Jayakumar Report took a slow and cautious approach to censorship, highlighting the need for the maintenance of racial harmony, protection of the young, and preservation of moral fibre and Asian values - elements that the CRC would later continue to uphold. The committee proclaimed that it saw no need for major changes to the existing censorship guidelines for films. However, it did suggest greater flexibility in censorship to take into account context and theme as well as the different impact of different media. It also recommended the creation of advisory committees to give the public a say in the censorship process.

The first CRC was appointed in May 1991, with ambassador-at-large Tommy Koh as chairman. In reviewing censorship policies and practices, the committee perused written submissions from individuals and organisations, in addition to having discussions with stakeholder organisations such as the Cinematograph Film Exhibitors Association and the Singapore Booksellers Association. It also commissioned a survey of moral values and attitudes towards certain printed, audio and visual materials. The survey found that Singaporeans were largely conservative. For instance, most of the respondents did not approve of lowering the age limit of R(A) films from 21 to 18. A good majority were also against premarital sex, cohabitation, extra-marital sex and homosexuality.

The committee upheld the need to protect the young, maintain social harmony and preserve general moral values. However, it noted that these imperatives should be balanced with the need for creativity to flourish, for artistic and educational merits to be recognised, and for more choices to be made available in a maturing society.

The committee acknowledged that different media had different levels of impact. For instance, it made a distinction between images and words, and hence supported the ban on image-rich publications like Playboy and Penthouse but suggested lifting the ban on Cosmopolitan, an adult magazine with mainly text. It also noted that there should be stricter standards for media that are easily accessible by the masses, such as television. However artistic, literary and educational merits were recognised as factors to consider during censorship, with possibly more leeway given to works that possess such value. In addition, the committee advocated more public involvement in the censorship process. One suggestion was the creation of advisory panels from members of the public to assist with appeals relating to publications and plays.

Some local writers regard the CRC Report of 1992 as one of the most liberal and progressive government documents written at the time. It argued for more leeway in the depiction of homosexuality, as long as it was not ‘glorified’. That year, a total of not less than 10 queer works were produced[1].

The second CRC was appointed in April 2002, headed by Liu Thai Ker, then chairman of the National Arts Council. This committee has been credited with playing a considerable role in relaxing the government's censorship boundaries. When it was formed, the committee was faced with a new and challenging landscape. With globalisation, society was being exposed to diverse ideas, influences and lifestyles from around the world and thus would likely demand more choice. In addition, technological advancement was opening up many new media formats and channels that allowed easier access to content and this could negate any safeguards that had been put in place.

In undertaking its review, the 22-member committee focused on access management and content standards. It held discussions with both the media industry and members of the public, and commissioned a survey to gauge the public's attitudes towards certain issues. On 4 September 2003, the committee released its report, laying the foundation for censorship in a new era characterised by rapid social and technological changes.

In its report, the committee put forth an inclusive vision. It stated that the censorship objectives should be to provide a wider berth for creativity and social capital and to allow for more choices. Nevertheless, it accepted that this push for relaxed rules must be balanced with the broader imperatives of protecting public order, the young, national interest and common moral values. It proposed a tetrapartite formula in which regulators, industry players, the community and artists work together synergistically in the censorship process. The underlying principle was that top-down governance should not be absolute and that the public and the industry must take on more responsibility. For instance, it emphasised the importance of parental guidance and consumer advice for content that is easily accessed by the young. Adults, on the other hand, could be given more choices through measures such as classification, zoning and belting.

In concrete terms, the committee has been noted for introducing the idea of more targeted film, cable and video ratings. It proposed a revised film rating system to allow for more diversity of content and recommended that films be allowed sequential dual ratings to give consumers more choice. Furthermore, it supported giving adults access to more risqué content such as the television series Sex and the City and the magazine Cosmopolitan. It also suggested giving citizen advisory panels a greater say in censorship.

The recommendations for homosexual themes in the 2003 CRC report were to:

(The following image is a screen capture of the relevant section of the downloadable PDF of the 2003 CRC Report[2]):

In May 2009, the Ministry of Information, Communications and the Arts announced that a mid-term CRC would be convened to review and update censorship policies. It explained that the committee was being appointed short of the ten-year interval because of the need for the relevant ministries to keep pace with the amorphous media and social landscape. This CRC will again focus on giving citizens more choice while safeguarding broader interests and it is expected to complete its review by mid-2010.

The statements regarding homosexual themes in the 2010 CRC report were:

recommends that a lighter touch be taken in classifying non-explicit homosexual content, subject to the provision of clear and unambiguous consumer advisories.

(The following image is a screen capture of the relevant section of the downloadable PDF of the 2010 CRC Report[3]): 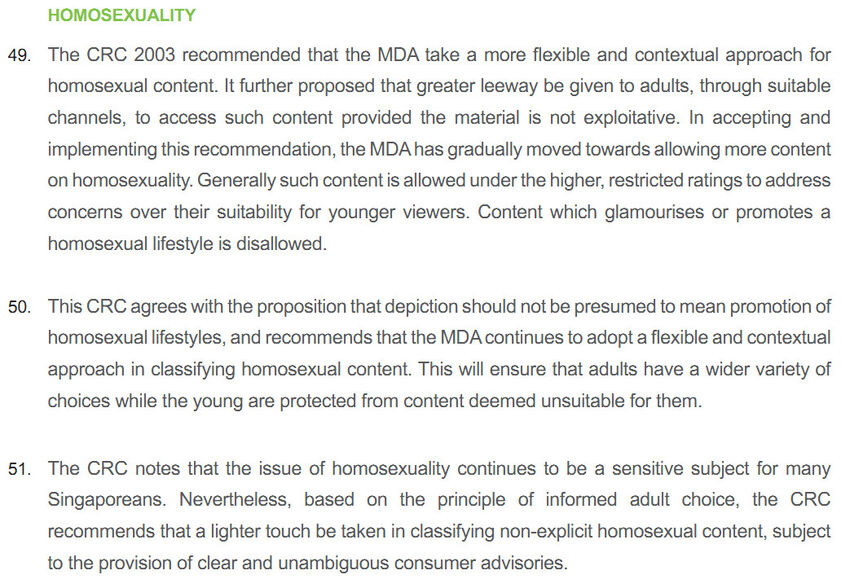 This article was written by Sara Siew and Shereen Tay and published in the National Library Board's Singapore Infopaedia[4].