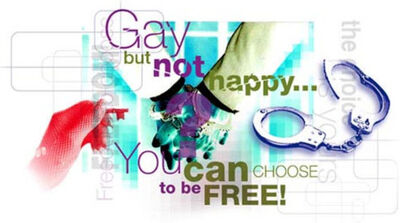 Choices is a ministry of the Church of Our Saviour established by a charismatic American ex-gay pastor, Sy Rogers, in 1991. Its purpose is to assist people who struggle with homosexuality and desire to overcome it to "restore their sexual identities to what God intends". Its clients include homosexuals, lesbians, bisexuals, transgender people, and heterosexuals who are "unhappy with their sexual choices or lifestyle".

In overcoming same-sex attraction, clients are "empowered to take responsibility in maintaining moral and relational wholeness". Essentially sexual orientation conversion therapy of a religious nature, Choices uses the instrument of a safe space for self-disclosure, self-discovery, change and growth, to achieve its aims. It also emphasises having a nurturing environment and network to support the conversion, so as to "discover life beyond the control of homosexuality." [1]

Additionally, Choices is also affiliated with Exodus International, a coalition of Christian agencies founded in 1976, providing ministry to people who are overcoming homosexuality.

Choices maintains and distributes extensive resources such as articles, books, CDs and DVDs to impart knowledge and motivate clients who want change.

The name ‘Choices’ was Rogers' brainchild. Clients who attended his 14-week lecture series divided into three modules realised its significance and pertinence when they were clearly told that regardless of the situation that led them to be gay, they could now make a choice to say ‘No’ to it[3]. It was also Rogers who came up with the cliche, ‘Freedom is when you are able to say “No”’.

Choices aims to establish practical and effective help for clients who desire it. This includes help for their families and friends. In addition to pastoral counselling, teaching, deep inner healing and recovery support groups, it also collaborates with other community professionals and therapists (eg. clinical psychologists and psychiatrists). It offers the best support framework possible through consultation and referrals to best meet clients' needs.

One of the key elements in Choices’ recovery programme is the establishment of support groups. Such groups provide a safe setting for self-disclosure, self-discovery, change and growth. It offers a nurturing environment to help clients find meaning in their sexual struggles, and is an ideal place to forge wholesome friendships.

Relearning ways of living and relating is not easy. To succeed, two critical ingredients need to be present: a tenacious, persevering motivation and the support of others who believe in one's efforts.

Choices Ministry has had the privilege of coming alongside numerous people in the past 15 years who have struggled with this issue. The Ministry provides both counseling and spiritual help for those who want to be set free from homosexual thoughts, tendencies and practices. It furnishes testimonies of God’s healing power in the lives of two former homosexuals :

1) A SECOND CHANCE by Mabel Sim

To project a scientific basis for its beliefs on homosexuality, Church of Our Saviour, in November 2007, included in its website a self-prepared document, which is a summation of various documents that speak against homosexuality as being a genetic trait.[4] Within the document, articles from various medical journals are cited, the summary of which are the following pointers:

The document mentions clearly its position is established firmly based on the Christian belief that God abhors homosexuality. It also states that Choices has effectively converted homosexuals, though it offers no numbers or statistics on its website. The website showcases several testimonies from individuals who previously subscribed to the homosexual lifestyle and claim to have found healing with the help of Choices ministry.

Another teenager, J. Kwok, who was sent there by his school recalled that his experience with the effeminate ex-gays there talking about their wives and children was so surreal that he figured that there was nothing wrong with himself and that the problem lay with the gay men living in self-denial instead.

Many gay men who left Choices' conversion therapy programme in its early years later joined the LGBT-inclusive Free Community Church and became gay activists in their own right. 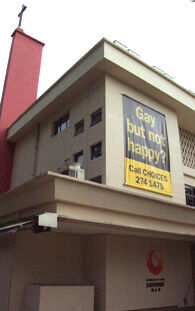 In the 1990s and 2000s, Choices would periodically hang prominent banners with anti-gay slogans on the exterior facade of the Church of Our Saviour, clearly visible to passers-by or anyone travelling on the MRT. Two of these messages which caused an outrage in the gay community were, "Homosexuals can change" and "Gay but not happy? Call CHOICES."

Opposition to repeal of Section 377A[]

In 2007, a review of the Singapore Penal Code suggested that Section 377A, which criminalises homosexual conduct between males, be removed. The Church of Our Saviour responded strongly to this, foremost by adding to its website a "position statement" stating its firm stand against homosexuality, and that homosexuality is a sin against god.

In addition, Senior Pastor Derek Hong gave various sermons on the issue. In a sermon in August 2007 entitled "God's Church and Homosexuality," Hong insisted on the existence of an agenda by gay activists. This agenda allegedly sought to ultimately silence all ex-gay groups, eradicate anti-LGBT organisations such as churches, strive to legalise same-sex marriage and to promote homosexuality as a viable lifestyle. Hong, however, did not offer any concrete evidence or proof of his accusations.[6]

An whistleblowing email also surfaced alleging that Hong circulated a message in April 2007 encouraging acquaintances to mobilise, influence public opinion, and lobby the government.[7] The email recommended a format for writing a protest and also the destination to submit the protest to, namely the Singaporean government feedback website at reach.gov.sg. While there was no evidence that Hong was indeed the author of the email, and Hong himself had issued no statement regarding it, an examination of the forum topics at reach.gov.sg revealed a large number of postings adopting exactly the recommended format.

The Association of Women for Action and Research (AWARE) is an independent advocacy organization in Singapore, noted for its work towards gender equality in the country for 25 years. Its past campaigns led to revisions to the Penal Code, e.g. giving Singaporean women the same citizenship rights as men in 2004. In March 2009, a majority of the management committee were replaced by members of the Church of Our Saviour, after an AGM which was well-attended by members who had only recently joined AWARE. The takeover was organised by Dr Thio Su Mien, former dean of Law at the National University of Singapore, who said she was concerned over AWARE's attempts to redefine marriage and family. Dr Thio Su Mien who described herself as the "feminist mentor" is also the Senior Executive Director of TSMP Law Corporation and mother of Nominated MP, Dr Thio Li Ann.[1] Many letters to the national press questioned the nature of the reforms to be expected from the new committee members.[2] An EGM was called by the members to carry out a vote of no-confidence on the new committee. Senior Pastor Derek Hong urged members of the church to join AWARE to support the new committee but was criticised by the Singapore's National Council of Churches for misusing his pulpit, for which Pastor Hong subsequently apologized.[3] The new committee was ousted on May 2009 during the EGM.[4] Deputy Prime minister Wong Kan Seng voiced his disapproval of incident that "a group of conservative Christians, all attending the same church, which held strong views on homosexuality, had moved in and taken over AWARE because they disapproved of what AWARE had been doing", and called for tolerance, cautioning that religion and politics must be kept separate.[5]