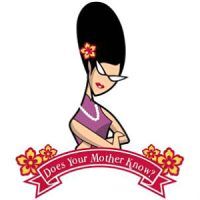 DYMK, which stands for Does Your Mother Know? was a gay bar which had three successive locations. Its final address was 41 Neil Road, Singapore 088824; telephone number 6224 3965. It was nicknamed Mommie DYMK. After 10 years of operation, it finally drew its shutters in early 2018 due to declining business in a very competitive and saturated market.

After the closure of Mox Bar in Tanjong Pagar in 2008, part of its management set up DYMK along Neil Road. The bartender, Benjamin Gho, better known by his drag persona of Bernice, who worked for a long period at Mox, also came over. Many patrons regarded her as Mommie DYMK as she was very welcoming to all and sundry.

In August 2009, DYMK shifted its premises to another shophouse unit just across the street at 9 Kreta Ayer Road. Pelangi Pride Centre moved along with it.

DYMK was a chill-out bar attracting a largely gay and lesbian crowd. Located among many other popular gay bays on Neil Road in the heart of Chinatown, it had its home in a beautifully restored double-storey heritage shophouse, unmissable by its bright red and yellow façade. The interior featured plush divans and couches on which patrons could unwind after a hard day's work. There was also original artwork displayed on the walls to create a 'home away from home' atmosphere, where one could kick back and chill out on the ground floor, or head upstairs for the retro music vibe and busy dance floor. The last Thursday of every month was dedicated to the local BDSM crowd, so patrons were advised to come prepared.

It was cosy with just the right amount of lighting (giving everyone a reddish-orangey glow), the right volume of music for conversations (not loud enough to induce a shout-off from across tables, or too soft to make the other table's gossip audible from the entrance of the bar), and a very healthy mix of bar-goers.

The Lychee Martini ($16) and Brown Cow ($14) were some customers' favourites. If one was feeling frisky, Tuesdays and Thursdays were martini nights at $10 a pop, and as they served the meanest martinis along Neil Road which was lined with bars and clubs, this was a huge bargain.

Sometimes they even served patrons a dish of lightly-salted tapioca chips for a light snack along with their drinks and they did not flinch when asked for more.

The place could be booked for private parties and offered a free birthday cake if one lets them know it is one's birthday at least two days in advance. 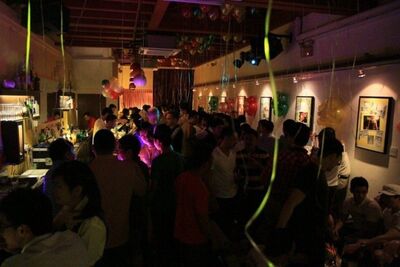 The management of DYMK was very supportive of LGBT activism and consented to its premises being used for numerous LGBT talks. The bar, in turn, stood to benefit from their business being boosted by the attendees. In reality, however, the people who attended these talks were rather parsimonious in their drinking and spending habits.

Just like its predecessor Mox Bar, DYMK kindly consented to hosting Pelangi Pride Centre within its premises until March 2011 when PPC moved to the Free Community Church's new home at Century Technology Building in Geylang.

The first meeting of stakeholders from the LGBT community to discuss the organisation of Singapore's first gay pride parade at Hong Lim Park initiated by Roy Tan took place here at 4pm on Saturday, 18 October 2008[1]. A total of 15 interested parties turned up, including filmmaker Boo Junfeng who was persuaded by educator Dominic Chua, Fridae CEO Stuart Koe and Fridae editor Sylvia Tan. During the meeting, Fridae's Chinese section editor, Choo Lip Sin, mooted the concept of forming a giant Pink Dot to be formed by building a spiral of participants linking hands from the centre outwards which everyone present unanimously agreed to.