Daryl Yang graduated with a double degree in law and the liberal arts from Yale-NUS College and the Faculty of Law at the National University of Singapore in 2019.

When he was an undergraduate, he co-founded and served as Executive Director of the Inter-University LGBT Network, a network consisting of five student-led organisations with the aim to foster safer and more inclusive campuses.

From 2014 to 2016, Yang was President of The G Spot, the Yale-NUS gender and sexuality alliance. He has been involved in LGBT community organising since 2013 as a volunteer with SGRainbow, an initiative by and for gay, bisexual and queer men.

Academically, he is interested in the anthropological intersections of sexuality, religion and health.

According to Yang, the most important lesson he learned as a student activist was the importance of listening.

As coordinator of The G Spot, he initiated various initiatives, such as Ally Week, Doing It Right (a sex-positivity and safer sex campaign) and Qamp, a two-day LGBTQ+ student activism training camp. Yang also led the group in achieving the AWARE Student Initiative Award in 2015.

In 2016, Yang delivered a talk entitled, "Chase that rainbow" at a TEDx event using the TED conference format. The event, however, was independently organised by a local community. A video of the talk was uploaded to TEDx Talks' YouTube channel on 8 August 2016[1]: 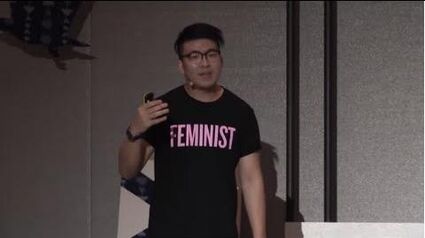 In 2020,Yang was named by The Straits Times as one of 30 prominent young Singaporean civil society activists under the age of 30.