Edwin Tong is a member of the People's Action Party (PAP) and a Member of Parliament (MP) for the Marine Parade GRC. 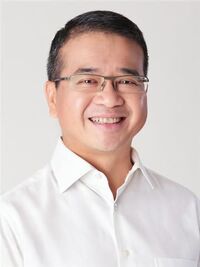 On 7 May 2019, when Tong was Senior Minister of State for Law, he made a speech on behalf of Law Minister K Shanmugam during the second reading of the Protection from Harassment (Amendment) Bill where he addressed the need to tackle online harassment against LGBT youth. He pointed out that:

"Recent surveys show: ... LGBT teens are 5 times more at risk of being abused on Facebook than non-LGBT teens. This online harassment translates into real world violence."[1]

Tong was a panellist during a virtual ministerial engagement session entitled "Conversations on Singapore Spirit" organised on Saturday, 3 July 2021 by the National Youth Council (NYC) in line with Youth Month which fell in July that year. A fellow panellist, actress and singer Annette Lee suggested embracing diversity in a tangible way and encouraging people to be "a little bit less insular". Tong expanded on the suggestion by saying: "Take, for example, if we had a friend who was from a different race, different gender, different age profile or different sexuality... If we each had a personal friend like that, and we understood and knew that person better, I think we will find ourselves a lot more tolerant, a lot more accepting, and eventually a lot more embracing of these differences."