In Singapore, the Sedition Act not only prohibits seditious acts and speech which undermine the administration of government but also criminalises actions that promote feelings of ill will or hostility between different races or "classes of the population". Despite the statute's statement that it protects all segments of society, which by right should also include the LGBT community, it has mainly been used against individuals who have made offensive rants against the Malay-Muslim community. The LGBT community has not been accorded any shelter under this law and hate speech against it is constantly indulged in with impunity.

Section 298 of the Penal Code makes it an offence to utter a word within hearing distance of a person, with the deliberate intention to wound that person’s religious or racial feelings. The penalty is a jail term of up to 3 years, a fine, or both. Section 298A similarly criminalises the promotion of enmity between different religious or racial groups and carries an identical punishment. No such protection is given to the LGBT community.

This glaring inconsistency was highlighted in a comic strip drawn in 2015 by openly gay cartoonist Otto Fong:

In stark contrast to the fact that all groups against any race, religion or minority are banned in Singapore, the Government allows anti-LGBT organisations to flourish. Most of the hate speech against the gay community that can be read by the public surfaces on Facebook groups such as We are against Pinkdot in Singapore[1], Ban Pink Dot & LGBT Activism - Protect Children[2] and Singaporeans Defending Marriage & Family[3]. Many comments made below online news articles, especially those on Yahoo! Singapore, are also virulently anti-gay, abetted by the posters' sanctioned cloak of anonymity.

Barely two weeks after being called up by the Internal Security Department (ISD) for his insensitive comments on Buddhism and Daoism[4], another objectionable 80-minute video, uploaded in May 2009, was noted on the the homepage of the 12,000 strong megachurch Lighthouse Evangelism at www.lighthouse.org.sg. It featured then 33-year old Pastor Rony Tan making comments during a sermon like, "Proper sex means life - it propagates life. Lesbianism and homosexuality simply mean death and barrenness.”[5]. He also quipped, "If you allow [homosexuality], next time people will want to get married to monkeys. And they will want rights. They’ll want to apply for HDB. With a donkey or a monkey or a dog and so on. It’s very pathetic.”[6].

The video attracted the attention of the public with local filmmakers Royston Tan and Sun Koh among a total of 85 people lodging a police report over the long Chinese New Year weekend against the pastor for his remarks[7],[8],[9]. It was removed from the church's website one day after the pastor apologised to Buddhists and Daoists for denigrating their beliefs in the second week of February 2010.

Comments on We are against Pinkdot in Singapore, 1 April 2014[edit | edit source]

The following comments were made below a Facebook post on the anti-LGBT group We are against Pinkdot in Singapore on 1 April 2014 [10]: 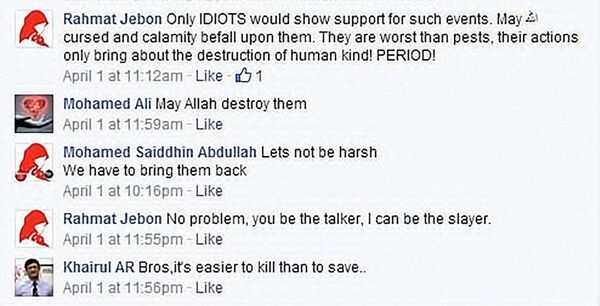 On 4 June 2016, a Facebook user Bryan Lim, then 37 years of age and a regional performance consultant at Canon, commented on the anti-LGBT Facebook group We are against PinkdDot in Singapore saying,

“I am a Singaporean citizen. I am a NSman. I am a father. And I swore to protect my nation. Give me the permission to open fire. I would like to see these £@€$^*s die for their causes”[11].

He was commenting on the hate group's post entitled, ‘Say No to Foreign Intervention‘.

Lim was fined $3,500 by the High Court on Friday, 4 November 2916[12]. He was initially charged with making an electronic record encouraging violence against LGBT people, which would have landed him a maximum of five years' jail and a fine. However, he pleaded guilty to an amended charge of making a threatening, abusive or insulting communication under the Protection from Harassment Act (PHA). District Judge Low Wee Ping said the aggravating factor was his use of the words "open fire" and "die for their causes".

The following comments were made below a Yahoo! article entitled, "Singapore court hears new challenges to gay sex ban" published on 13 November 2019[13]: 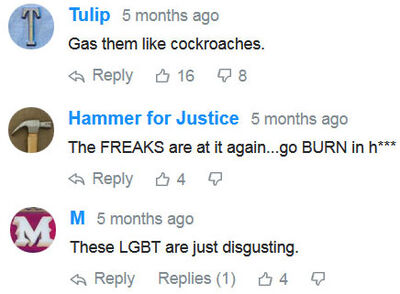 The following comments were made below a Yahoo! article entitled, "Disney cuts same-sex kiss scene in Star Wars: The Rise Of Skywalker for Singapore market" published on 20 December 2019[14]:

Microaggression is a term used for brief and commonplace daily verbal, behavioural, or environmental indignities, whether intentional or unintentional, that communicate hostile, derogatory, or negative prejudicial slights and insults toward any group, particularly culturally marginalised groups like the gay community. Although falling short of being hate speech, it nonetheless can be detrimental to an LGBT person’s psychological health and may lead to chronic stress, depression, anxiety, and lowered self-esteem.

An example of institutionalised microassault is the existence of Section 377A of the Penal Code whereby the State imparts to society and to gay men the conviction that homosexuals are criminals for indulging in sex even when it is consensual, between adults and done in private. Another is the messaging put out by religious organisations which conduct conversion therapy like the Choices ministry at the Church Of Our Saviour and truelove.is[15] that tell gay individuals they are "broken" and that they can "come out" of their sexual orientation to become straight.

1) Asking a gay man during Chinese New Year or other holiday when he is going to find a girlfriend or get married. This insinuates that he is deficient in some way because he does not have an opposite-sex partner or that he is irresponsible for not getting married and producing children.

2) Asking someone in a gay or lesbian couple who plays the "man" or "woman" role in the relationship.

2) Asking a gay friend after a long hiatus whether he has a new boyfriend, implying that gay relationships are inherently fragile or that homosexuals are promiscuous.

3) Using the phrase “that’s so gay” to refer to something stupid, odd, or undesirable, which is often considered insulting and hurtful.

4) Asking a transgender person about their gender reassignment surgery.

In 2019, the Maintenance of Religious Harmony Act (MRHA) was amended by Parliament to protect both religious groups as well as non-religious ones, like the gay community. An Explanatory Statement to the MRHA, passed in Parliament in the first week of October 2019, was added to the Act and specifically referred to the LGBT community, stating that it would be an offence to use force or violence against it on the grounds of religion[16].

It was supposed to do so by dealing with both groups equally as the new provisions were meant not only to reduce conflicts between and within religious groups, but also to prevent religion from being used as a basis to attack groups that may not be of a religious persuasion, such as the LGBT community[17]. However, in practice, no concrete action has been taken against most instances of online hate speech.

LGBT Singaporeans who suffer from cyberbullying and online harassment may also avail themselves of the Protection from Harassment Act (POHA) although the latter applies to everyone and does not specifically mention the LGBT community, thereby making it less groundbreaking in terms of LGBT rights.

On 29 April 2021, a person who recounted that in the last 3 years since he had been back to live in Singapore, he had experienced a few cases of discrimination against himself as a gay man based on religious grounds[18]. He wanted to put an end to it so he wrote to the Ministry of Home Affairs. The Ministry's reply was heartening as it gave the individual some basis to protect himself from future harassment (points 3 and 4).

"2. Although section 377A remains in the Penal Code, the Government has publicly stated that the Police will not proactively enforce it against consenting adult males in private. The Attorney-General’s Chambers has also taken the position that a prosecution under section 377A would not be in the public interest where the conduct in question was between two consenting adults in a private place.

3. The Government takes violence or hate speech against any person seriously, and does not condone such crimes committed against any individual, regardless of their sexual orientation or religious beliefs.

4. The Protection from Harassment Act protects all persons, regardless of their sexual orientation, against harassment and abuse. Recent amendments to the Maintenance of Religious Harmony Act have also made it an offence to urge violence on the grounds of religion or religious belief, against any person or group. Action can be taken if a religious group, using religion, attacks a non-religious group, for example a LGBTQ group, on the basis of religion."

Retrieved from "https://the-singapore-lgbt-encyclopaedia.wikia.org/wiki/Hate_speech_against_LGBT_people_in_Singapore?oldid=36223"
Community content is available under CC-BY-SA unless otherwise noted.