Johore Road was a street in Singapore that no longer exists today. Formerly located between and parallel to Queen Street and Victoria Street, and bisected by Ophir Road, it was the less well-known cousin of its glamourous counterpart, Bugis Street, just a stone's throw away. It was the seedy haunt of transwoman prostitutes who solicited sex from locals, away from the glare of Western tourists. No photographs or media attention were focussed on this street of ill-repute; only a no-frills approach to an economic exchange. 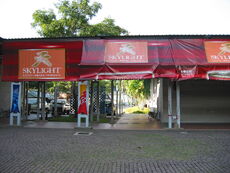 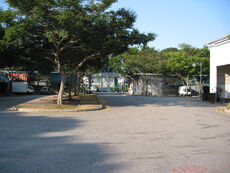 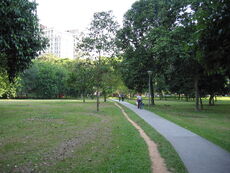 It was one of the few roads to be completely erased from the map of Singapore after a fire in the late 90s, to be replaced by an unnamed park next to the Bugis MRT station and the Victoria Street Wholesale Centre.

Queen Street is well-known today as the gateway to Malaysia’s Johor Bahru thanks to the cross-border bus services that operate from the modest-looking Queen Street Bus Terminal. An express bus would have taken one from Queen Street to Johor in under 45 minutes. However only two decades ago, one could have just walked across the road to "Johore", or rather, Johore Road to be more accurate.

Johore Road was expunged from the maps in the late 1990s, joining the likes of some memorable places and streets like Bukit Larangan, an early 19th century name for Fort Canning Hill; and Hock Lam Street, a street on the current site of Funan Centre.

Johore Road saw its heyday in the 1960s and the 1970s, a period in which it came to be known as a notorious red light district with transgender prostitutes soliciting for business in the shophouses and alleys. It was just a stone’s throw away from the then world-renowned Bugis Street, which was famous for its cabaret performances, transgender prostitutes and food stalls.

While Bugis Street was imprinted on postcards and attracted thousands of Western tourists and sailors, Johore Road was its less glamourous counterpart that only the locals knew.

Occupants of the rows of shophouses at Johore Road were a fascinating mix mostly made up of home temples, small family businesses, and illicit brothels. Street hawkers also lined the street on both sides.

Many hawkers eventually relocated when the government made roadside hawking illegal.

Johore Road was also a popular spot for some religious devotees. There would be a crowd during the 15th day of the Lunar New Year (chap goh mei).

Shops and residences at Johore Road were unfortunately plagued by frequent fires and minor floods from the overflowing open drains during downpours. The shophouses were eventually demolished, and after the brief occupancy of Victoria Street Wholesale Centre, a green field is all that remains of Johore Road today.