Li Huanwu (born 22 July 1986) is the second son of Lee Hsien Yang and Lee Suet Fern. He is a business developer at the AI firm Afiniti. After achieving a stellar academic record, Li started out as an investment banking analyst at Goldman Sachs. Following that, he held similar positions at L Capital and Värde Partners.

Li went to the Singapore American School (SAS) for his primary and secondary education. In a 2007 interview with The New York Times, then-Prime Minister Lee Kuan Yew shared that one of his grandsons had dyslexia and was enrolled in SAS which at the time, had teachers trained in helping dyslexic students. Subsequently, Li attended Raffles Junior College (RJC) (now Raffles Institution) for his post-secondary education.

Fresh out of university, Li worked at Goldman Sachs as an investment banker from July 2011 to July 2012. He then moved on to L Capital, working as a senior analyst from September 2012 to November 2014. In January 2015, he joined Värde Partners as an investment analyst before leaving the company in June 2016. As of January 2020, Li is employed at Afiniti International Holdings Ltd. as a Vice President of Business Development in Southeast Asia.

Li Huanwu and Heng Yirui have been together since 2013. The pair caught the public eye in 2018 with the release of the ‘Out In Singapore’ project. It was also revealed that Li was 4 years older than Heng. Li and Heng’s studio portrait was exhibited at The Projector’s Intermission Bar as part of the photography campaign by Leslie Kee.

On Thursday, 1 October 2020, Yahoo! Singapore uploaded a video of an exclusive interview with corporate lawyer Lee Suet Fern who spoke about her son, Li Huanwu, coming out about his sexuality and what she had learnt from the experience. 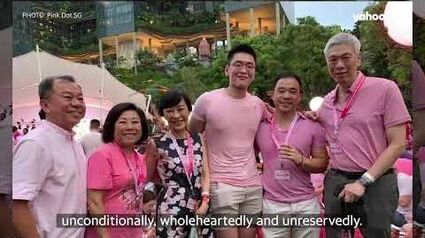 "He did come to me because I’m closest to him and I am not sure I handled it very well initially, although I rapidly realised it was tough for him, and that he needed our love and support. And I’ve learnt a lot in the process. Huanwu is our child, and we love and support him unconditionally, wholeheartedly and unreservedly. He has made every one of us in our family better persons. We think he was hugely courageous to have come out. We know that for him and for other gay people they face discrimination all the time. And in Singapore, they also face the Sword of Damocles of criminality. That’s tough. At the end of the day, at the heart of it all, whether you’re gay or not, each of us just wants to be accepted and loved for who we are, and we love Huanwu.”

Barely one week after Taiwan made history on 17 May 2019 when it became the first jurisdiction in Asia to legalise gay marriage[2], Li married his long-time male partner in an intimate ceremony on Friday, 24 May 2019 in Cape Town, South Africa where same-sex marriage was legalised in 2006[3],[4]. Before their wedding ceremony, the pair visited the Mana Pools National Park. The event was a small and private affair with only close friends and family in attendance. The Singapore Airlines cabin crew also presented a cake and congratulatory note to the couple on their flight to South Africa.

“Today I marry my soul mate. Looking forward to a lifetime of moments like this with (Huanwu),” wrote veterinarian Heng Yirui, Li’s partner, on his personal Instagram account in a post from Cape Town on the evening of Friday, 24 May 2019. Li's father, Lee Hsien Yang, said: “I believe my father would have been thrilled to know this.” (see main article: Lee Kuan Yew's views on homosexuality).

After tying the knot, the couple also sent a statement and photos of their wedding to Pink Dot Singapore, which posted them on its Instagram page.

“Today would have been unimaginable to us growing up. We are overjoyed to share this occasion in the glowing company of friends and family,” they said in a statement to Pink Dot Singapore.

Li had gone public about his partner more than a year before the wedding. In July 2018, he and Heng appeared in an LGBT-themed photography exhibition called Out In Singapore which aimed to foster acceptance and support for LGBTQ persons who wished to come out to family, friends and peers in the community. The couple could be seen with their arms around each other in one of the portraits. Both had also attended Pink Dot at Hong Lim Park since 2017.

Alternative media sites in Singapore, including Mothership and The Independent, were quick to pick up on the announcement while mainstream media outlets steered clear of reporting it. Mothership’s Facebook post attracted 1,700 likes and 400 comments, mostly positive and congratulating the pair. One user, Donna Lim, commented: “Congrats! Love has no boundaries.”

In mainland China, multiple posts of Li’s wedding surfaced on social media app WeChat, which have garnered hundreds of likes and comments as of Saturday afternoon, 25 May 2019. A few reacted with disdain but many of the Chinese commentators also congratulated the couple, with some hoping that Li would front the fight for gay rights in Singapore.

Li is an avid supporter of the Pink Dot movement which encourages the integration of the LGBTQ community in Singapore. He also believes in repealing Section 377A, a law which criminalises sex between consenting adult men in Singapore. In 2018, Li attended Pink Dot with Heng Yirui and a group of friends. The following year, he brought his parents along to the event.