Liberty League, a non-profit group which aimed to promote 'healthy gender identity' (a specious euphemism for ex-gay ideology) was set up by Leslie Lung in 2004 and officially launched on 25 January 2006.

Liberty League announced on its website that it would be closing for good in December 2014.

Liberty League's founding was supported by the Church of Our Saviour where Lung worshipped, Trinity Christian Centre and City Harvest Church amongst others. Willie Cheng, a Roman Catholic who strove to further many social causes, managed to convince the Government to put in seed money of $90,000 for Liberty League. Cheng had recently stepped down from the National Volunteer and Philanthropy Centre (NVPC) as Chairman and was also the retired CEO of Accenture (Singapore). 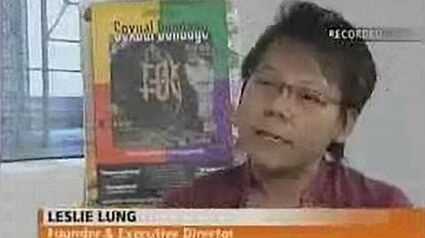 "Focus groups to help gays and lesbians understand their sexual identity are just one of the things that newly set up Liberty League plans to put in place.

The non-profit organisation has received a S$100,000 grant from the National Volunteer and Philanthropy Centre.

Liberty League says it is the first community service group of its kind in Singapore.

Its mission is to promote gender and sexual health for the individual, family and society.

To achieve this, it will conduct sexuality talks in schools.

It will also work with organisations such as the Girls' Brigade to educate teenagers on sexuality and biology.

The group will address issues related to romantic relationships, be they heterosexual or otherwise.

It says another important aspect of its work is focus groups for gays, lesbians and transsexuals who are grappling with their gender identities.

Currently, 70 percent of those it works with fall into this category.

There will also be support groups for parents of homosexuals.

Said Leslie Lung, founder and executive director of the Liberty League, "This is very much based on the Alcoholic Anonymous self-help principles. So people come; it's an environment that is friendly, warm, based on friendship, encouraging people to take small steps to talk about the issues, recognize why they are doing certain things, find resolutions."

Does it mean that Liberty League champions gay and lesbian rights?

Leslie Lung explained, "We champion human rights really. It's about people being able to say, I'm human and sexual orientation is so wide. Being gay and lesbian is part of it; coming out of it is part of it as well."

In a conservative society like Singapore, the league's work can be expected to be controversial.

But the NVPC's S$100,000 start-up grant has helped given the low-profile group a public platform for its work.

The money comes from the Ministry of Community Development Youth and Sports; a ministry official also sits on the panel that approves the grants.

Said Tan Chee Koon, chief executive officer of the NVPC, "Among teenagers, there are some who are confused about sexuality issues, and do need to seek clarification and help to work them through their confusion."

She added, "They need to go to some non-threatening parties to talk about their concerns."

Asked about the nature of the group's work, and those it will be working with, Mrs Tan says the NVPC is all for work that benefits the community.

She said, "We don't sit in judgment on this score but of course it must be for the public good. It must benefit the community; it must be about good works. But if somebody in this case seeks to go out to affirm gender -- in their case healthy sexuality and gender affirmation -- we are neutral on that score."

Mrs Tan added, "When I look at the grant, we are like social investors that invest in non-profit initiatives, which if they prove to be successful, the outcome is that lives are rebuilt, needs are met, volunteers are raised and community resources mobilised."

Liberty League will be officially launched on 25 January."

Epilogue: Liberty League announced on its website that it would be closing for good in December 2014.

PLU tries to get grant withdrawn[]

Singapore's pioneering LGBT advocacy group, People Like Us (PLU), tried to get the grant decision reversed. Not only was the cause thought to be unworthy and potentially deleterious to the schoolchildren who would be psychologically adversely affected, it was also a case of a technically erroneous decision.

It was unjustifiable because in three different ways, Liberty League should not have qualified even based on the technical criteria, let alone the qualitative consideration of suitability.

NVPC's own website www.nvpc.org.sg stated that for the New Initiative Grant, applicants must show that

It was common knowledge that Choices had been giving these talks for years in schools. Moreover, Leslie Lung himself had been giving such talks personally, as first-hand accounts showed. How could this be a "new" initiative? Incidentally, Lung claimed on Channel NewsAsia that it had never been done before.

Liberty League Pte Ltd did not indicate anywhere that it was a non-profit company. Normally, non-profit companies were not "Pte Ltd", but just "Ltd", (or "companies limited by guarantees" in ACRA jargon). For example, it was NKF Ltd, not NKF Pte Ltd.

And of course, it was most assuredly religiously motivated. PLU did not just have circumstantial evidence; it had a first hand account from a school student who was in the audience listening to Lung speak in one of his earlier lectures. There was repeated mention of God, Christianity and the Bible.

Acting not just as gays and lesbians, but as Singaporeans, PLU's concern was what kind of sloppy background checks did NVPC do before they dished out $100,000, when PLU, as outsiders and amateurs, could find all this information in one afternoon? Did this government body do due diligence?

Separately, a reporter from one of the newspapers, herself intrigued by the CNA story, sat at a computer and did a simple Google search of Leslie Lung and Liberty League. Within minutes, what she saw troubled her.

She approached PLU for the story and it was pleased to cooperate.

In the meantime, PLU decided that it would play the role of concerned citizens fully. It asked for a meeting with NVPC (the email cc'd Vivian Balakrishnan as well) in order that it could exchange thoughts and present to them what it knew.

The meeting was not pleasant. NVPC (plus one MCYS representative) took the position that they would not tell PLU anything at all. Everything was confidential. But PLU was supposed to tell them what it knew. The body language was terribly defensive. But the body language was enough to tell PLU that they had not known that Liberty League was a Pte Ltd company, that its paid up capital was $10.

But despite the frosty and suspicious reception, it did not matter. PLU's conscience was clear. It had done its part as citizens. If nothing was done despite its giving facts to NVPC and MCYS, then it know, and it would be in its right to say, where the failure lies.

Working in parallel, for 3 days, the reporter tried to get MCYS to give her a comment in response to her questions. For 3 days, they did not respond. Nonetheless, MCYS was aware that a news story was brewing.

The newspaper story was supposed to be in friday's edition (20 January 2006), but minutes before it was to be activated, a call came from a ministry to stop the story. The newspaper editor complied.

What exactly was the motivation behind the Stop order, PLU did not know.

Anyway, what started off as an issue about the wisdom of giving $100,000 to a group that in PLU's view was not suitable, became a story about possible failure of checks within the government... and had then, with censorship, become an issue of transparency and accountability.

The hole was dug deeper and deeper. It was not a gay issue anymore but an issue about governance and accountability with public money and public trust.

Why Liberty League was offered funds

THE National Voluntary and Philanthropy Centre (NVPC) has cleared the air on its support of an organisation focusing on sexual and gender identity.

"It is on this basis that NVPC offered the New Initiative Grant to Liberty League in January 2005, in support of its secular social projects," she added. "Liberty League has so far not drawn on the grant. NVPC will assess the efficacy of all Liberty League's proposed programmes before disbursing any funding,"

Gay rights groups had criticised the funding which comes from the Ministry of Community Development, Youth and Sports being made available to a group that they claim has been endorsed by Christian organisations.

In a press statement, Liberty League said that it will provide "a sanctuary where people experiencing sexual or gender crises can find help and relief".

Its founder, Mr Leslie Lung, is the author of a book called [[Freedom of Choice]], a collection of stories about "freedom from sexual bondage".