Manazine was a bimonthly periodical, first published in October 2003, which was targeted at a male gay readership in Singapore. The magazine was initially available at numerous outlets including bars, theatres, cafes and restaurants. From September 2004 onwards, after censorship by the Media Development Authority, it only became accessible at a rate of SGD$25 per annum for 6 issues. If picked up directly from the Manazine office or at selected outlets, it was available at a discounted price of SGD$20. Subscriptions could be made on their website at http://www.emanazine.com/ (now defunct).

Despite announcements in early 2003 that Singapore would relax its censorship laws including lifting the 20-year ban on Cosmopolitan magazine, the Media Development Authority (MDA) warned Manazine to tone down its 'pro-gay' content and use of half-nude male bodies. The MDA found the use of many of the published images unacceptable.

Although the MDA did not officially warn the periodical as reported in Streats newspaper on 27 February 2004, its officials met with the magazine's publishers after their third issue was launched earlier that month. An MDA spokesman said: "We have warned the publisher that the current state of the magazine, which features nudity and homosexual content, is unacceptable." The regulatory body had considered an image of a bare-chested man, which accompanied a health and fitness article in its inaugural issue published in October 2003, to be "too homosexual." The authority also took issue with an article which quoted theatre practitioner Beatrice Chia as saying, "why should we tolerate gays, we should accept them." (Chia was directing the play Bent about the persecution of homosexuals during the Holocaust at that time.)

Arjan Nijen Twilhaar, Manazine's chief editor said: "In MDA's view, this is perceived as promoting a gay lifestyle." The MDA also questioned the following statement in an article on the pink dollar: "Though so young, we should consider Singapore bold and progressive with the move towards openness and maybe even acceptance rather then just tolerance." According to Twilhaar, other points of contention included:

In March 2004, the publisher was forced to withdraw most of the 10,000 copies of its third issue over its use of half-nude male bodies and "pro-gay" content in its third and previous issues. Twilhaar said: "Manazine feels strongly that writers or interviewees can voice their opinions, ideas and views on certain topics, a move that is welcomed by the government. In a statement to The Straits Times, Dr Lee Boon Yang stated: 'Better educated and more knowledgeable Singaporeans want to be more informed about government decisions and want their views to be heard and considered.'"

People Like Us (PLU), Singapore's pioneering LGBT advocacy group commented: "People Like Us deplores yet another attempt at censorship. In particular, the government is being hypersensitive to visuals with homoerotic sensibilities, even tasteful ones, when such is becoming commonplace in the international media; is being sexist as visuals with the same degree of nudity, but featuring female models are widely seen in other local magazines; is suppressing free speech by making an issue of Manazine reporting a comment by Beatrice Chia, and other content touching on homosexuality; is spreading disinformation by continuing to cast homosexual orientation in terms of mere "lifestyle" - that must not be promoted.

In a letter to Streats, PLU wrote: "The MDA is doing Singapore a disservice. The government tells Singaporeans that to survive, we must be plugged into global trends. We must be a cosmopolitan city, able to attract the best and brightest to live and work here. Yet here is another attempt to keep Singaporeans' minds closed. No doubt, the MDA will resort to the familiar argument that Singapore is a conservative society and the people here are not ready for anything modern, least of all attitudes. Before they fall back on this excuse, the MDA should reflect on how their own censorship polices have kept Singaporeans as ostriches with heads in the sand, and how it would be intellectually dishonest to claim public opinion as justification for censorship, when it is their own censorship that has created that very same public opinion."

"ESSENCE," Manazine's fourth issue was revamped and was launched on 15 April 2004 as the publishers were required to work closely with the MDA for an infinite period. However, Twilhaar maintained that the magazine's bold content would not be compromised. 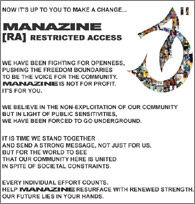 In early September 2004, Manazine announced that the periodical would move from being a free pick-up zine to one that would only be sent to subscribers or available to card-carrying members at selected outlets. The publisher's decision was in response to discussions with the MDA which met with him on 11 August 2004.

According to The Straits Times, the MDA had received complaints by concerned parents about the magazine's homosexual content and easy availability. The MDA's spokesperson added that the authority had reminded publisher Arjan Nijen Twilhaar during the meeting that local magazines should not promote homosexuality as a lifestyle.

Twilhaar who adopted the 'controlled distribution' approach said: "We were also told to be sensitive to society's reactions to the gay issue. We listened to the advice and made sure that we do not cross the line. It is now up to the community to keep Manazine going. We are working hard on our second series, which will be completely different from our first annual theme. We have some celebrity contributors, like Margaret Cho, Hossan Leong and Cyril Wong, and we are excited about our new format. Manazine also gets more attention from corporate Singapore, which is essential if we want to see a more integrated community."