After establishing an English-language webportal Fridae.com in the year 2000, scientist and entrepreneur Dr. Stuart Koe, who had worked for a few years with the Economic Development Board, tested the socio-political boundaries and organised Singapore's first private, widely advertised, open-air gay mega-party. Not unexpectedly, along with the government's liberalising trend at the time, perhaps abetted somewhat by a need to mitigate the effects of the 1997 Asian financial crisis, the party was given the green light by the police. Koe even managed to secure corporate sponsorship for the historic event. In a shrewd move to underscore the gay community's loyalty to Singapore and the values which she upholds, the party was held on 8 August 2001 to coincide with National Day and aptly given the moniker "Nation".

It was held at Sentosa's Fantasy Island. "Nation" was dubbed by the foreign media as Singapore's 'coming out party'. Over 1500 paying gay revellers celebrated both the eve of National Day, as well as their sense of community. Many flew in from Sydney, Malaysia, the U.S. and Hong Kong. The venue was divided into 3 zones: the Centro Boyz zone where the Miss Divastating drag competition was held, the Womyn's zone where no men were allowed for most of the evening, and the Chill Out area where guests could mingle and booths were set up to sell food, drinks, toys and to distribute flyers. 8 to 10 uniformed police officers made their obligatory visit at around 11:30pm to check that everything was alright and left without incident after 15 minutes. The mega-do also raised funds for local safe-sex advocacy group Action for AIDS (AfA) which received a portion of ticket sales. 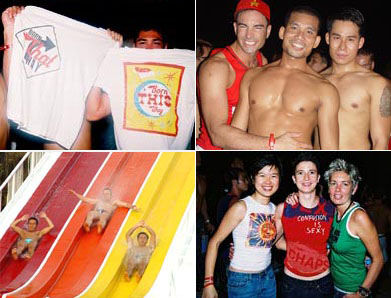 Despite initial concerns that there would be Government resistance to another gay Nation party, more than 2500 red-and-white dress-themed people gathered at the Fountain Gardens and Musical Fountain in Sentosa on Thursday 9 August 2003 for Singapore’s 37th birthday and 2nd pride party. Nation.02, co-organised by Fridae and Kinemat Productions was sponsored by Qantas and other corporations including Pepsi, Planet Fitness and The Gallery Hotel. Paying partygoers had a choice of 2 dance areas and were treated to a specially-produced laser show by Oracle Lasers, percussion by Idham Budiman, and visual effects by Fake from Kinemat. Attendance by regional visitors was even higher than the previous year's bash, drawing close to 500 partygoers, mainly from Hong Kong, Thailand and Taiwan. 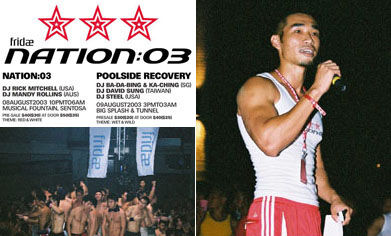 Fridae's Nation.03 extravaganza at Sentosa expanded to become a 3-day event in 2003, attracting an estimated 4500 paying attendees intent on celebrating Singapore's 38th National Day. It included a welcome party at Why Not? bar on August 7 and a poolside recovery party on August 9 at the water-theme park Big Splash and Tunnel Club, also located on the same premises. This year's major corporate sponsor was Subaru represented locally by MotorImage Enterprises Pte Ltd. An estimated 1000 partygoers were visitors from Australia, Hong Kong, Japan, Malaysia, Taiwan, Thailand and as far away as Canada and the U.S. The Sijori Resort Sentosa, located a few minutes from the party grounds and Hotel 1929, the official hotel for the party, reported a 100 percent occupancy rate during the period.

Government and mainstream media support for Nation was at an all time high because earlier in 2003, the then Prime Minister Goh Chok Tong had made a statement in Time magazine (Asia) that openly gay civil servants would henceforth be employed in the civil service, even in sensitive positions (see Archive of Time magazine article "The Lion in Winter" by Simon Elegant, 7 Jul 2003). He also made the now-famous quip that "we are born this way and they are born that way, but they are like you and me." The mainstream and LGBT media reported this news widely and the gay community was elated.

Nation.03 marked a milestone in that it was the first time in Singaporean television history that a local gay event was reported in a positive light, accompanied by snippets of bare-chested men dancing on podia. The following day, Channel NewsAsia and its sister station MediaCorp TV Channel 5 announced, 'Nation.03 can be seen as a gauge of Singapore's tolerance.' Organiser Stuart Koe and well known actress and LGBT ally Pam Oei who attended the party were also interviewed in the television news clips. 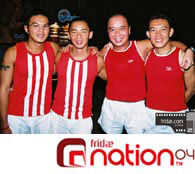 The weekend kicked off with a "Make Love, Not War" Opening Party at Suntec City's Singapore International Convention and Exhibition Centre on Saturday Aug 7, followed by the main event, Nation at the Sentosa Musical Fountain on 8 August 2004 and the Closing Party at the world-famous Zouk Club on 9 August 2004.

For the first time, Nation also included the participation of various arts organisations in an informal "Nation Arts Programme." This included the plays Mergers/Wills by Toy Factory in Mandarin, Top or Bottom and Mardi Gras by The Necessary Stage, and The Revenge of the Dim Sum Dollies by Dream Academy Productions. 2 related art exhibitions were also held during this period, “Red + White = Pink” by Utterly Art and an exhibition by Art Seasons.

The private party was the largest in the series, to date, and attracted more than 8,000 paying revelers, 40% of whom were international visitors. Tourist revenue generated during the festival was estimated to be nearly SGD$6 million, according to data collected by an independent market research firm.

The gay community was shocked and outraged[1] when in early December 2004, the Public Entertainment Licencing Unit (PELU) of the police rejected an application for a public entertainment licence to hold SnowBall.04[2] on 26 December 2004[[3]].

Despite the fact that Nation.04 had been nominated for "Best Event Experience" in the 2005 Singapore Tourism Awards, the police said that “the event is likely to be organised as a gay party which is contrary to public interest in general.”

In a press statement, the police said the following were taken into consideration:

“The promotion materials were widely advertised on Fridae.com, a known gay portal";

“Observations during the indoor Opening Ball at Suntec showed that patrons of the same gender were seen openly kissing and intimately touching each other. Some of the revellers were cross-dressed, for example, males wearing skirts. Patrons were also seen using the toilets of the opposite sex. The behaviour of these patrons suggested that most of them were probably gays/lesbians and this was thus an event almost exclusively for gays/lesbians";

“A number of couples of the same sex were seen hugging and kissing in public after the event while waiting for taxis and checking into the nearby hotels after the party";

“Several letters of complaint were received from some patrons about the openly gay acts at the Ball.”

It also said: “The Police recognise that there are some Singaporeans with gay tendencies. While Police do not discriminate against them on this basis, the Police also recognise that Singapore is still, by and large, a conservative and traditional society. Hence, the Police cannot approve any application for an event which goes against the moral values of a large majority of Singaporeans. Future applications for events of similar nature will be closely scrutinised.”

Gay patrons who attended Nation.04's Opening Party at Suntec City confirmed the heavy presence of the police. Subsequent to this, events at clubs frequented by gay men such as Zouk saw more attendees being pulled out just outside the venue for tests for recreational drug abuse. The police also made a threatening call to Chinablack for holding Sunday night gay parties which marked a policy change and started a series of events culminating in the ban of Snowball and later, Nation.

When queried by reporters on the rejection of the entertainment licence to hold Snowball, Prime Minister Lee Hsien Loong said that the decision reflected "balance and judgement" and that "the party should not be targeted at gays alone"[5].

Many gay analysts also felt that in addition to the above reasons given by the police, the concern raised in September 2004 by the Minister of State for Health, Dr. Balaji Sadasivan about the rising numbers of HIV cases in Singapore and his unsubstantiated attribution of the cause to fraternisation between locals and Westerners during gay parties was pivotal in instigating the official policy turnaround. Another hypothesis advanced by the then editor of Fridae's Chinese section, who was involved in the organisation of the events and their requisite permit applications, was that there was a change in the head of the police division which approved these permits. Apparently, he was an Indian Singaporean who was personally homophobic and allowed his personal biases to influence official policy towards large-scale gay parties.

Gay activists henceforth made curbing the rising incidence of HIV in Singapore's gay community a priority. They realised this was the biggest stumbling block in the way of encouraging the government to be more sympathetic of LGBT equality. After Dr. Balaji Sadasivan took over as the Minister of State in charge of the HIV epidemic, he made an initial parliamentary speech based on perhaps biased MOH data/inputs suggesting that the influx of foreigners in town for Fridae's parties contributed to the rise in HIV infection. Subsequently, during a regional AIDS conference which he attended with Drs. Stuart Koe and Roy Chan of AfA, where they fraternised for a few days, Balaji developed a better understanding of men who have sex with men (MSM) and became an ally.

In April 2005, the Licensing Division of the Singapore Police faxed a rejection of Fridae's application to hold Nation.05, by then, Asia's most acclaimed gay and lesbian private party which had been held annually since National Day in August 2001, citing the event to be 'contrary to public interest.' Nation.05, slated to coincide with Singapore's 40th birthday, had clinched sponsorship by Fortune 100 global communications leader Motorola for the second consecutive year and Subaru for the third. The carmaker was a well known pioneer corporate sponsor of gay and lesbian athletic and community events in the United States and was represented by Motor Image Pte Ltd locally. Dr. Stuart Koe, CEO of Fridae said, "We are disappointed that the authorities have deemed a National Day celebration by Singapore's gay citizens as being 'contrary to public interest' when it had previously been approved for four years without incident. This is a direct contradiction to previous calls for embracing of diversity."

Undaunted and determined to circumvent the official ban, Fridae creatively transplanted Nation.V, to Phuket, Thailand. It was held from Friday 4 November to Sunday 6 November 2005 at 8 venues with DJs and artistes from the U.S., Thailand, Australia, Japan, Malaysia, Singapore, New Zealand and Hong Kong. The event, which created a buzz in the international gay party circuit gave a booster shot in the arm to Phuket's recovering tsunami-devastated economy. It was reported in Australia's Sydney Morning Herald that Singapore's loss was Thailand's gain.

The resulting private event was smaller, with less than 1000 partygoers. Eventually, all 800 tickets on offer were sold, mainly to Thais, as compared to the 8000 mostly Singaporean revellers who flocked to the previous party before the ban. The host hotel which housed the participants was the Crowne Plaza hotel on Karon Beach. The welcome reception was held around the hotel pool, the G.Y.M. party at the Arena disco and the closing after-hours party at the Locker Room.

The outrage in the gay community caused by the ban of the Nation parties spurred activists from Singapore's first and hugely influential LGBT advocacy group People Like Us to organise IndigNation in August 2005. It was envisaged to be a series of LGBT-themed events that would be relatively more sedate in nature[6], intellectual and aesthetic if possible, to render itself in stark contrast with the frenzied carnival atmosphere of Nation.