Pink Dot 2017, Singapore's annual LGBT pride gathering, was held on the evening of 1 July at Speakers' Corner, Hong Lim Park. The ambassadors for the year were singer Nathan Hartono, paralympian swimmer Theresa Goh and actor Ebi Shankara. A new organisation called Red Dot for Pink Dot was set up by straight ally Darius Cheung to solicit funding for the rally. For the first time in the event's history, Hong Lim Park was barricaded and security tightened to bar foreigners from entering, as well as to prevent terrorist acts. Also, the symbolism of the rainbow, seen in gay pride parades in other countries all over the world, was used by the organisers in stark departure from previous years when it was avoided due to the rainbow flag's connotations of protest.

The Pink Dot 2017 media launch was held at 6:30pm on Tuesday, 30 May 2017 on the ground floor auditorium of 72-13, the home of TheatreWorks along Mohamed Sultan Road. The changes to the Public Order Act which came into force in November 2016 and the barricading of Speakers' Corner to comply with the new regulations were announced, as well as the local sponsors and ambassadors for the year's event. The campaign video was also unveiled[1]: 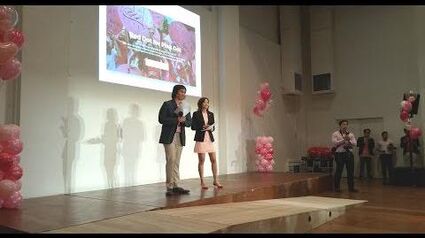 During the launch, the ambassadors for Pink Dot 2017 were announced - Ebi Shankara, Theresa Goh and Nathan Hartono[2]: 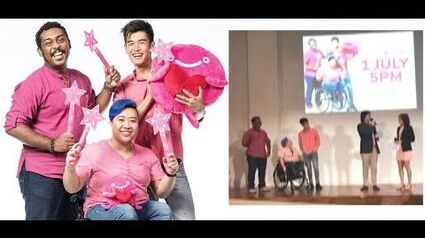 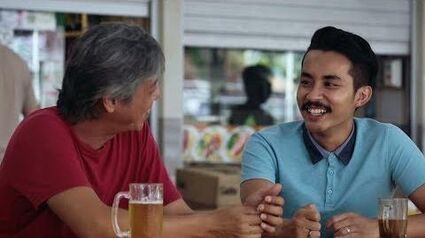 In October 2016, Singapore's Ministry of Home Affairs banned foreign residents and entities from organising and participating in the event, stating that LGBT discourse in the country should be restricted to its citizens[4]. Only Singaporean citizens and permanent residents were thereby permitted to attend the rally; the identity card of each participant was verified at police checkpoints as they entered the barricaded park[5]. Organisers said that 20,000 Singaporeans and residents attended the event, a drop from 25,000 and above in previous years[6]. In addition, foreign companies such as Airbnb, Apple, Facebook, Goldman Sachs, Google, Microsoft, NBCUniversal, Salesforce.com, Twitter and Uber were not permitted to sponsor the event[7],[8]. Despite the new regulations, 120 Singaporean companies donated to the event, making up for the loss of contributions from the multinationals[9],[10].

In 2017, straight ally and entrepreneur Darius Cheung established the group 'Red Dot for Pink Dot' and launched a campaign on Sunday, 26 March 2017 to solicit funding for Pink Dot from local businesses[11]. The new organisation said in a statement: "The Red Dot For Pink Dot campaign aims to be the platform where other Singapore business leaders from every industry can lend their support to both inclusiveness and diversity in Singapore." Even before the campaign started, about 50 companies had already signed up through word of mouth, overturning conventional wisdom that Singapore companies were leery of being associated with the LGBT movement. It prompted Home Affairs Minister K Shanmugam to quip in February 2017: "Why don't we have confidence that our people can organise and take part in civic activities?" Pink Dot's call for local sponsors started because the Government made it clear the previous year that events held at the Speakers' Corner could not have foreign involvement. Previous iterations of Pink Dot had relied mostly on foreign dollars from multinational firms such as Google, Twitter, Facebook, Barclays and Goldman Sachs. In 2016, only 5 of the 18 sponsors were local.

In October 2016, the Ministry of Home Affairs reiterated that only local entities could sponsor, promote or get its employees to participate in events at the Speakers' Corner. It defined what "local" companies were: they needed to be incorporated or registered here, and be majority-controlled by Singaporeans. To draw local dollars, Pink Dot lowered its sponsorship tiers. Singaporean companies could donate $1,000, $5,000 or $10,000, compared with the $7,000 or $15,000 tiers last year. One of the sponsors, chocolatier Demochoco, crowdfunded its $5,000 pledge to Pink Dot. Demochoco owner Lim Jialiang, 27, sold 50 boxes of 24 pieces of chocolates at $100 per box to raise the money in 24 hours. He said: "I wanted to involve the broader community so more people can play a part in this. That I raised money so quickly shows that Singaporeans do support Pink Dot."

In just under six weeks since the campaign's launch, Pink Dot had surpassed its target of finding 100 local sponsors. As of Thursday, 4 May 2017, Pink Dot had received sponsorship dollars from 103 Singapore firms spanning industries from food and beverage, to film, healthcare and engineering. According to calculations, this brought the total sum raised to $201,000, exceeding their $150,000 target. The fundraising campaign continued till the end of May 2017. Eventually, the group signed up 120 local sponsors, securing adequate funding for the event. Pink Dot spokesman Paerin Choa called the response from local businesses "amazing", saying: "It really does show that Singaporean companies are more than ready and willing to put their money where their hearts lie, towards building an inclusive and diverse Singapore for all."

Pink Dot 2017 saw over 20,000 Singaporeans and permanent residents attending[12]. "For the first time, Speakers' Corner experienced barricades set up around Hong Lim Park with security officers checking bags and the residency status of attendees[13]. The organisers set up seven entry and exit points. Checks were made to ensure the safety of attendees, in view of global terror attacks at public events. The organisers said that the level of security had been tripled compared to the previous year, with metal detectors and barricades used to comply with a law that required the police to monitor events with a crowd of more than 5,000 people. The heightened security saw queues snaking around the park from late afternoon till 8pm. Law Minister K Shanmugam wrote on his Facebook on Tuesday: "Pink Dot event will attract a large crowd and it would be irresponsible not to take security measures seriously at such events. The security requirements will also be imposed at other events, even outside Speakers' Corner, depending on the estimated crowd size, amongst other factors." The Government had said the move was in response to a growing threat of terrorism. The barricades and security checkpoints were also needed to comply with new rules prohibiting foreigners from attending the event. After the Public Order Act was amended in October 2016, organisers of events at Speakers' Corner from November 2016 onwards had to ensure that only Singapore citizens or permanent residents participated.

There was an attendee who dressed as Babadook, a Netflix show character that became an accidental gay icon when the website listed The Babadook as an LGBT film. Retiree Loh Kwek Leong, 63, was there with his wife, daughters and their boyfriends. Loh, spent about 10 minutes in the queue with his family before having their identity cards and bags checked at the entrance. He said: "When my grandkids look back on this, I want them to see their grandfather was on the right side of history." The park was packed with people dressed in pink and hosting picnics. Wine drinkers shared the space with parkgoers who took along their children and pet dogs. People streamed in from 3pm and the park was full by 6:40pm. At this juncture, organisers announced that people could only enter if other attendees left the park. A spectator named Leslie, 30, who worked in the service industry and asked to be identified by just his first name, arrived at 7pm and was still in the queue 40 minutes later. He said: "After the ban on foreigners attending, it is up to Singaporeans and permanent residents to do their part, so I'm here to stand up and be counted." Stefan Kwang, 28, who worked in sales and marketing, attended with his boyfriend and sister. He said: "We have to be here especially this year, given the ruling which allowed only Singaporeans and permanent residents to attend." The organisers would not disclose the exact turnout but observers estimated the number to be below the 28,000 who took part the previous year[14]. Attendee Atiq Lukman, a trans man, said: "The crowd is less dense this year, but I think we're getting new people. Every year, I hear of people making this their first Pink Dot. However, the lower figure did not include any foreigners restricted to the sidelines, or those who could not pass the security barriers after the park reached capacity[15].

Some from the LGBT community took to the stage to share their views and experiences, including Deveshwar Sham, 32, a dog handler who was a married transgender man. There was also a concert featuring local acts like Sam Rui, Tim De Cotta and Apex Project. At around 8pm, Pink Dot ambassadors Nathan Hartono, Theresa Goh and Ebi Shankara went on stage and rallygoers switched on their pink torches to form a pink dot. Aerial images showed the park bathed in pink, with a rainbow running through the crowd. The symbolism of the rainbow had assiduously been avoided by the organisers in previous years because of its associated with gay pride parades and their connotations of protest. However, that year, the organisers felt that it was time to align Pink Dot with the international LGBT rights movement to show solidarity with it as well as to better campaign openly for more serious issues such as the repeal of Section 377A which the image of a family-friendly, docile and cute pink dot mascot would not find congruous to address. Pink Dot spokesman Paerin Choa said: "We are immensely grateful for the massive support Singapore has shown, which we feel reflects a turning point in attitudes towards the LGBT community within the greater Singapore fabric. "Even with this restricted space that limits Singapore's true propensity for love, we feel that we have taken yet another important step in achieving true equality for all Singaporeans."