The Progress Singapore Party, founded by former Member of Parliament Tan Cheng Bock in 2019, is strongly supportive of LGBT equality as it believes in a more compassionate Singapore with a strong social safety net.

During the forum entitled 'Face to Face 2' organised by The Online Citizen on 18 August 2011, in which four presidential candidates fielded questions from a small audience[1], LGBT activist Alex Au asked where each candidate stood on Section 377A. Tan replied[2]:

Terence Soon was the head of the Progress Singapore Party's youth wing. He contested in the 2020 General Elections as part of a five-person team that eventually garnered 36.9% of the vote in Tanjong Pagar GRC, losing out to a People's Action Party slate led by Minister for Trade and Industry Chan Chun Sing. In April 2021, during the Covid-19 pandemic, he quit the party as a member, citing job and family considerations.

During the 2020 General Elections, while most candidates and political parties took to live streams and pre-recorded videos to share their plans for their constituencies and Singapore, Terence Soon took a different approach which appealed to the younger generation - an Ask Me Anything (AMA) session on Instagram[3] on Sunday night, 5 July 2020[4].

Fielding 50 odd-questions over a one-and-half-hour period, he covered a wide range of topics including parenting advice, his Tanjong Pagar GRC’s team and whether he would still be taking to the skies as a pilot if elected. When asked: "What is your stand on LGBT issues and 377A?", he replied:

"This is a rather complicated subject, and I'd like to discuss in further detail. But in short, the party stance is that we would like to repeal the criminal aspect of 377A, and we respect the rights of all LGBTQ people in the country."

However, when some members of the LGBT community took a look at Soon's Instagram stories the following day, they could no longer find the above screenshot of this particular question and answer. The conclusion was that he deleted it as the other answers from the night before were still there.

Leong Mun Wai is a Central Executive Committee member of the Progress Singapore Party. He has been a Non-constituency Member of Parliament of the 14th Parliament of Singapore since 16 July 2020. Prior to the May 2021 Parliamentary session, the Progress Singapore Party announced that it would "continue to raise important questions in Parliament for a more compassionate Singapore" and that it believed "compassion begins with a strong social safety net"[5]. Leong Mun Wai raised the following queries for the Minister for Social and Family Development:

and for the Minister for Home Affairs: 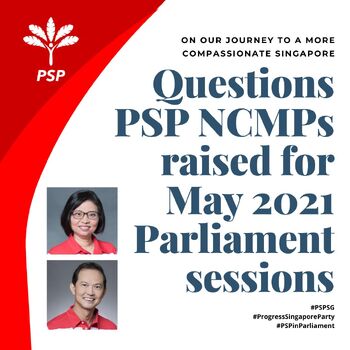 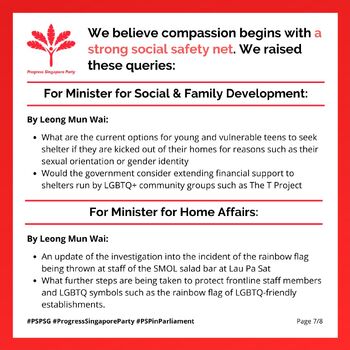 Retrieved from "https://the-singapore-lgbt-encyclopaedia.wikia.org/wiki/Progress_Singapore_Party_politicians%27_views_on_LGBT_rights?oldid=36338"
Community content is available under CC-BY-SA unless otherwise noted.