Sayoni is a community committed to empowering queer women in Asia. It began as an online forum which was established in Singapore in 2006.

The Convention on the Elimination of All forms of Discrimination Against Women (CEDAW) is a comprehensive bill of rights for women. It covers economic, social, cultural, civil and political rights based on the principles of substantive equality, non-discrimination and State obligation. State signatories are obliged to guarantee women’s equality and freedom from discrimination in public and private life, as well as to report periodically on their progress.

The CEDAW Committee is the UN body that monitors the implementation of the CEDAW Convention. It comprises 23 experts who represent the range of fields of competence covered by the CEDAW Convention, as well as equitable geographical distribution and principal legal systems.

Singapore ratified the Convention on the Elimination of All forms of Discrimination Against Women (CEDAW) in 1995. It is one of only two international human rights treaties that Singapore has ratified. It is significant because the State has asserted consistently that it will only ratify conventions that it is prepared to implement.

In the 2007 review of Singapore’s progress, the CEDAW Committee asked the State how it intended “to prevent discrimination against lesbian women in the workplace, in access to health services and in society in general.”

The State responded that “Homosexuals were not discriminated against; they had the same right to employment, education or housing as everyone else.”

In 2008, AWARE started a series of workshops to prepare their CEDAW shadow report. Jean Chong and Kelly Then of Sayoni attended their training. Initially, they had planned to include the concerns of lesbian, bisexual and transgender women in AWARE's report. However, they later decided to prepare their own report in order to give the issues due prominence.

The report was a 3-year journey and in between, there were new developments like the AWARE saga and the evolving use of section 377A of the Penal Code. The research and writing of each subject of the report was done by several volunteers: Anj, Indulekshmi Rajeswari and 4 others. As the project leader and editor, Then whittled the drafts down from the initial 30-plus pages to half its length, applying conceptual insights and practical tips from IGLHRC’s Guide (http://www.iglhrc.org/cgi-bin/iowa/article/publications/reportsandpublications/945.html) and subsequently wrote the introduction, executive summary and conclusion. AWARE and Sayoni eventually agreed to mutually endorse each other's reports.

In 2010, Sayoni submitted a preliminary report for the CEDAW Committee's consideration. The Committee convened in a pre-session to examine all the submissions, including information it had sought through other avenues, e.g., human rights reports. A month later, the Committee issued a “List of Issues” for the State to respond to and Then was happy to see that their question on discrimination based on sexual orientation and gender identity quoted Sayoni's report substantively. Then was especially heartened to see that the Committee had done due diligence and appeared to be informed about Singapore's issues with discrimination, making NGO efforts worthwhile.

Through this report, Then learned more about the specific forms that the discrimination took. Her perspective of CEDAW so far, was that it could create a consensus for global standards of gender equality. It raised awareness of discrimination and created a platform for constructive dialogue with all stakeholders, especially the State.

During a pre-session review leading up to the 49th CEDAW conference, the Committee asked the State:

"Please comment on reports with regard to prevalent and systematic discrimination against women based on sexual orientation and gender identity in the social, cultural, political and economic spheres in the State party. What measures are being undertaken to address these problems, especially with a view to destigmatizing and promoting tolerance to that end?"

“The principle of equality of all persons before the law is enshrined in the Constitution of the Republic of Singapore, regardless of gender, sexual orientation and gender identity. All persons in Singapore are entitled to the equal protection of the law, and have equal access to basic resources such as education, housing and health care.”

"… Singapore’s employment legislation provides recourse for employees who feel they have been unfairly dismissed, including on the grounds of their sexual orientation and gender identity and they have recourse to appeal to the Minister for Manpower for reinstatement to their former employment."

In late July 2011, the 49th CEDAW session was held at the United Nations headquarters in New York City.

The State of Singapore and Non-Governmental Organisations (NGOs) submitted reports and during the session, engaged in dialogue with the Committee. The Committee then made its Concluding Observations, which identified areas of concern and made recommendations for progress. 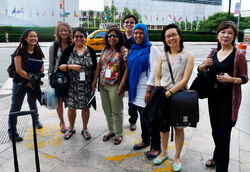 Singapore’s civil society was represented by 4 organisations that had submitted shadow reports and made representations to the Committee: 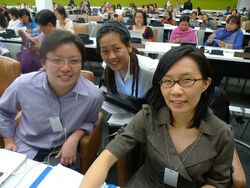 Notably, it was the first time that HOME and Sayoni had participated.

It was also the first time that the concerns of lesbian, bisexual and transgender (LBT) women were raised by Sayoni during this process. Sayoni, represented by Jean Chong, Kelly Then and Vanessa Ho, highlighted prevalent and systematic discrimination against women based on sexual orientation and gender identity across social, cultural, political and economic spheres in Singapore.

Much of the research for their presentation was contributed by People Like Us (PLU) pioneers Alex Au and Russell Heng. 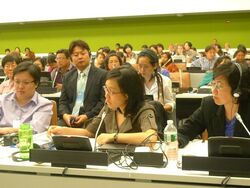 Kelly Then delivered the following oral statement to the CEDAW Committee on 18 July 2011:

I am from Sayoni and represent women in Singapore on sexual orientation and gender identity. The State has said that there is no discrimination against homosexuals in Singapore. Our research and experience show otherwise. The most pressing issues are:

Legislation inherited from the British criminalises sexual intercourse between men. This criminalisation sets the stage and cascades. It condones discrimination against lesbian, bisexual and transgender women, and it prevents equality of access, opportunities and outcomes for us in public policy.

Next, censorship is applied through media codes and policies to pathologise consensual, adult relations between women such that only negative stereotypes are permitted for broadcast. Their constant, cumulative effect informs behaviour and shapes public opinion, contributing to discrimination against sexual minority women.

Sexual minority women are excluded from employee spousal and maternity benefits which are based on marital status. We have no legal recourse for discrimination at the workplace and face risks of additional repercussions if we use existing grievance mechanisms.

Children in school are subject to bullying and ostracism by their peers because of their perceived sexual orientation or expressed gender identity. There are no policies and regulations to protect them explicitly from such discrimination or abuse.

Furthermore, the State mandated that all sex education providers exclude crucial, potentially life-saving information on sexuality for sexual minority women. This contributes to a higher prevalence and risk of depression, suicide, substance misuse and deliberate self-harm among them.

Women in same-sex partnerships are excluded from access to spousal medical rights, financing and family planning.

These were but some of the instances of prevalent, systemic discrimination detailed in Sayoni's report.

Consequently, sexual minority women experience not only discrimination as women but as sexual minorities. Their gender identity and sexual orientation intersect with multiple identities such as socio-economic status, ethnicity, age, religion and disability, to create unique forms of discrimination.

On 22 July 2011, in response to Sayoni's oral statement, gender equality experts from the CEDAW Committee asked more than 100 questions during an intense, 5-hour Constructive Dialogue with Singapore’s State delegation. They dealt with the lack of provisions in prohibiting discrimination on the basis of sexual orientation, Section 377A's impact on gay women in employment and housing, censorship, invisibility of sexual minority women in public and political life, consultation with LBT women on public policy, protection of sexual harassment in workplace for LBT women, complaint mechanisms for LBT women in the workplace, direct and indirect discrimination, healthcare for same-sex partners, domestic violence against LBT women, property and inheritance rights for LBT women, state support for LBT rights, etc.

Minister of State for Community, Youth and Sports, Madam Halimah Yacob, delivered a comprehensive statement on Singapore’s progress with gender equality and the State’s decision to partially withdraw reservations to Articles 2 and 16 of the Convention. She affirmed the State’s “full commitment to the promotion and protection of human rights, in particular the rights of women”.

Civil society organisation (CSO) representatives were pleased that the CEDAW Committee recognised critical impediments to gender equality in Singapore and raised their concerns with the State during the Constructive Dialogue, as well as in the Concluding Observations. While some organisations were disappointed with the State’s stock responses, all believed that the State was committed to fulfilling its treaty obligations and welcomed future progress.

Sayoni's achievement at CEDAW in extracting a statement from the Government that women's (including lesbians' and transgender women's) rights to equality were protected by the Constitution enabled human rights lawyer M. Ravi to argue on behalf of his client Tan Eng Hong's challenge to the constitutionality of Section 377A in September 2011 that sexual orientation was covered under the Constitution even though the latter did not explicitly state so.

The same points were again used in November 2013 by Ravi when arguing a case on behalf of his client Lawrence Wee who sought protection under Article 12 of the Constitution for LGBT Singaporeans in the workplace.