Shogun started life as The Box in 2003. The Box was Singapore's first cruise club and was located in a shophouse at 182, Telok Ayer Street, near Tanjong Pagar; telephone number 6221-0367. It was set up by the owner of Big Boys Bar & Restaurant, a chub and chaser club which later rebranded itself as Xposé Bar.

The Box offered a free flow of drinks, movies, a play area, cubicles and a dark maze. The theme for Sundays was Bare Bear Chubs and Chasers. The cruise club concept whereby patrons could look for hook-ups fully clothed and with their shoes on within its premises, or in various stages of undress according to their comfort level, proved less popular locally so business was poor. 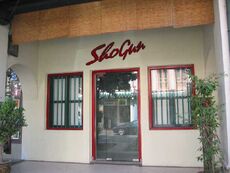 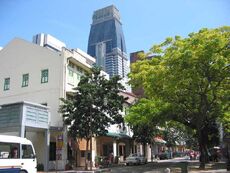 The keep itself afloat, the establishment was repackaged as a gay sauna under a new name - Shogun spa. It used the tagline, "Home of the great". After the revamp, it introduced nude nights (the last in Singapore to do so) because this theme was all the rage at other gay saunas. These events were held on the third Saturday of each month on all floors after midnight and it stayed open till dawn.

In mid-2006, it shifted its location to another shophouse several units away, to 176 Telok Ayer Street, while retaining the same telephone number. This incarnation displayed its huge logo on the wall of its posterior facade too and the sign was eminently visible from the street.

The operations at 176 Telok Ayer Street ceased in mid-2007 and the spa moved yet again to 18A Hong Kong Street, Singapore 059661, still holding on the same telephone number of +65 6221 0367. This new address was just across the road from Clarke Quay Central near Clarke Quay MRT station and was therefore more accessible via public transport than its previous 2 locations.

Shogun finally settled at its current location at 51A Pagoda Street, still managing to hang on to the same telephone number as when it first started out as The Box.

Entry to Shogun is gained by heading up the staircase from Trengganu Street, on the corner opposite Ten Men's Club. The reception desk is located on level 2 up a flight of steps from the street level entrance.

Level 2 has lockers, a TV lounge, a dark maze, and a very clever glass-enclosed smoking room so that patrons can still cruise those taking a cigarette break.

Level 3 has a large air-conditioned lounge with futons, dark rooms, cabins, an external non-air-conditioned enclosure with wooden platforms and futons, an outdoor shower, a toilet, a pool of tropical fish and a smaller television set around which chairs are arranged along a corridor.

Shogun is one of the most popular gay saunas and one of the last 4 currently still operating (as at 2018) because of the reasonable entry charge of $12 (formerly only $10), welcoming staff and friendly, unpretentious crowd which tends to be the masculine, Chinese-educated, mature chub and bear types and their admirers. It open 24 hours daily with free re-entry within the same day and there are theme nights. No membership fee required.

Retrieved from "https://the-singapore-lgbt-encyclopaedia.wikia.org/wiki/Shogun_(Singapore_gay_sauna)?oldid=20221"
Community content is available under CC-BY-SA unless otherwise noted.