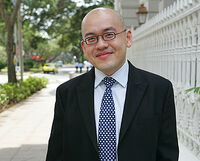 Siew Kum Hong is a Singaporean lawyer who spent the first 5 years of his career in private practice specialising in technology matters, first in a big firm and then in his own boutique practice. He has been in-house ever since.

He joined Airbnb, Asia-Pacific in October 2012, and was with Yahoo! for 5.5 years before that.

Siew was a Nominated Member of Parliament during the term of the 11th Parliament from 18 January 2007 to 17 July 2009, together with Gautam Banerjee, Cham Hui Fong, Edwin Khew Teck Fook, Loo Choon Yong, Kalyani K. Mehta, Eunice Elizabeth Olsen, Jessie Phua née Wong Wai Chan and Thio Li-ann. It was during his stint as an NMP that he presented the Parliamentary petition to repeal Section 377A of the Penal Code and for which he is best remembered.

Siew was also a founding member and past Vice-President of MARUAH, a Singapore human rights NGO. He was AWARE's legal advisor for the annual general meeting at Suntec City during the AWARE saga in 2009.