The Wee Kim Wee School of Communication and Information (WKWSCI) is guided by three objectives in their work.

First, WKWSCI continues to meet the demand in Singapore and the region for well-trained personnel to staff the media industry and information services.

Second, WKWSCI has become a premier research institution that generates empirical and humanistic analyses of communication topics and policy issues important to Singapore and the region. Faculty members publish their research and showcase their creative works in international journals and forums.

Third, WKWSCI continues to establish and maintain an international network of educators, researchers, and info-comm professionals through collaborative projects, conferences and other exchanges.

The School's curriculum, programmes and activities are designed to move WKWSCI forward in achieving our three key objectives. International recruitment of academic and professional faculty, state-of-the-art communication laboratories, and global institutional affiliations ensure that the School remains a world-class Centre of Excellence. 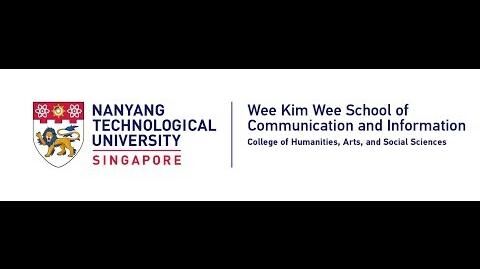 To be the premier school of communication and information in Asia with international eminence.

To educate and nurture communication and information professionals and academics, to advance knowledge, and to serve society.

The building WKWSCI calls home is a $22.6 million facility spanning more than 7,000 sq m. The five-storey building curves around an airy courtyard and amphitheatre fondly known to students as the Depression.

Flanking the courtyard are the latest Cognitive and Behavioral Sciences Laboratory- a 220 sq m facilities which support research in the area of computer mediated communication, cognition and integrated multi-sensory testing and the swanky Newsplex Asia—a 160 sq m collaborative media lab boasting state-of-the-art technology for journalists, news editors and designers. During the semester, the Newsplex also serves as the newsroom for our campus paper. Right beside the Newplex is the freshly revamped Lee Foundation Lecture Theatre, where just about every WKWSCI student, almost like a rite of passage, attends their core lectures.

Moving from the courtyard, you will find the Atrium, where our iconic benches are. Students never fail to congregate here, be it to study, socialise, or snack—sometimes even simultaneously. Fully-equipped studios and media production suites are also found nearby. For those persistent hunger pangs, you can also grab a quick bite before class at the new Sukho Thai Café right outside the school. Need to do some research or print your essays? We also have the Communication & Information Library, which is home to over 16,000 volumes and a fascinating archive of final-year projects by our very own students.

No matter which track you specialise in, we have dedicated labs for you. The school boasts a broad range of advanced laboratory facilities for audio, radio, video, television, print media, multimedia production, advertising, as well as communication and information research.

With the most technologically advanced equipment and resources available to you, you will get the skills and expertise needed to excel in an ever-evolving media landscape. That way, you can rest assured you will be graduating ahead of the game.

The Endowment Fund is an important resource for the advancement of the School by supporting student projects, events, conferences and workshops, innovative programmes and research projects. It was set up in 2006 with the objective to benefit students and faculty of the Wee Kim Wee School.

The School administers ten of the 31 different funds that it benefits from. They are:

Founded in 1992, the WKWSCI has grown to become one of the region’s leading sources of world-class education and top-notch research in communication and information studies. In 2006, the School established an endowment fund of S$30 million to support a wide range of educational and research activities. Extensive research, teaching and production facilities help to keep faculty and students at the leading edge of their disciplines.

In the 2014 QS World University Rankings by Subject, NTU’s Communication & Media Studies was ranked 6th in the world.

WKWSCI celebrates its 25th Anniversary with a series of activities for students, alumni, faculty, industry partners and stakeholders

Professor Charles Thomas Salmon is appointed as the Chair of the School with effect from 8 September 2014.

According to the 2014 Quacquarelli Symonds (QS) World University Rankings, Wee Kim Wee School of Communication and Information is ranked first in Asia and sixth in the world in the category of media communication studies

Professor Charles Salmon is appointed as the Acting Chair of the School with effect from 1 September 2013.

The School celebrates its 20th Anniversary in May 2012 with a gala dinner at the Fairmont Hotel.

The School hosts the 60th Annual Conference of the International Communication Association, 22-26 June 2010. 2009

Assoc Prof Benjamin Detenber is appointed as the next Chair of the School, effective from 8 September 2008.

The School hosts the first World Journalism Education Congress in collaboration with the Asian Media Information and Communication Centre (AMIC) and the Association for Education in Journalism and Mass Communication (AEJMC). 2006

The School establishes the Singapore Internet Research Centre. A fifth floor is added to the School as it expands its programmes.

Assoc Prof Ang Peng Hwa is appointed as the next Dean of the School.

The School is renamed as the School of Communication and Information.

The School expands to include a fifth division - the Division of Information Studies. A new curriculum introducing minors is implemented. 2000

The school hosts the global IAMCR 2000 conference in Singapore for the International Association for Media and Communication Research. The conference is titled "Communication Beyond 2000: Technology, Industry and Citizens in the Age of Globalisation".

The school graduates its first PhD candidate, and a $1.5 million endowed professorship is established by the Shaw Foundation to focus on new technologies.

As part of its service to the media industry, the school graduates the first class of communication professionals enrolled in Master of Mass Communication degree programme.

The faculty celebrates the graduation of the first class of undergraduate students who completed the school's four-year honours degree curriculum.

The School moves into a new $22.6 million building at the western edge of NTU's Yunnan Garden Campus.

A campus newspaper, The Nanyang Chronicle, is launched. The campus newspaper provides students with hands-on journalism experience and to report on issues and events of importance to the NTU community.

The school enrolls its first class of 96 undergraduates and master's degree students.

NTU establishes a free-standing School of Communication Studies and appoints Prof Eddie C.Y. Kuo, then head of the Mass Communication department at National University of Singapore, as the founding dean.